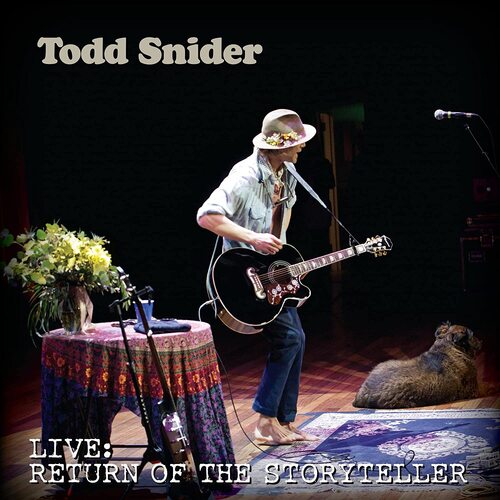 Return Of The Storyteller (2xLP)

Label: Aimless Records
Live: Return of the Storyteller â€“ his third live album and nineteenth overall - plays like a masterclass by one man with a guitar and a freewheeling imagination. Threading his husky-voiced phrasing through a likable cosmic cowboy manner, he invites you on a tour of tunes humorous (â€œBig Finish,â€ and the have-meets- have-not â€œIn Between Jobsâ€), Proustian (â€œPlay a Train Song,â€ â€œToo Soon To Tell,â€ and the lump-in-the-throat snapshot of John Prine on â€œHandsome Johnâ€) and heart-worn (â€œLike a Force of Nature,â€ â€œThe Very Last Time,â€ â€œRoman Candlesâ€). As the fifteen-song set unfolds, you can feel a tangible bond building between Snider and his fans.

While the album captures what Snider laughingly calls his â€œsecond tour - because I went out on the road in '94 and never went home until the pandemicâ€ - it acts as both a summing up of a thirty-year career and a look ahead.</p>
Order vinyl: