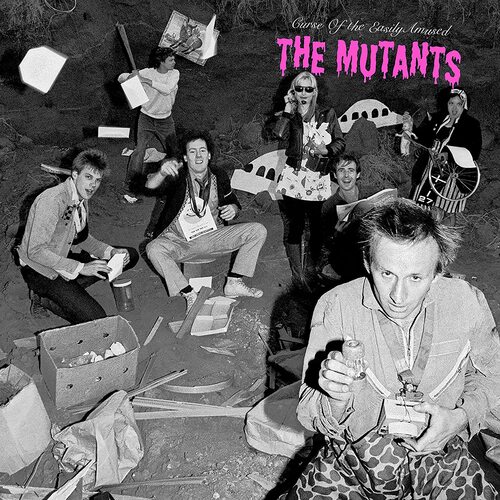 Curse Of The Easily Amused

It's hard to let go of a good thing. More than four decades after The Mutants first appeared on the San Francisco underground music scene, four of the original members are still playing shows together under that name in 2022. After all, mutants are known to mutate, and that's what this colorful, energetic musical collective has been doing off and on since 1977. Perhaps even more surprisingly, the sessions for their lone album, 1982's Fun Terminal, continue to bring forth lost nuggets. In punk and new wave lore, Fun Terminal is considered a troubled project. Prior to the album's appearance, the Mutants had released only one 7-inch single -- 1980s' The Mutants EP -- and the band also had songs featured on two local compilations. Both the EP and one of the compilations were issued by 415 Records, the legendary Bay Area indie that made the jump from the new wave trenches to the majors when they signed a deal with Columbia Records in 1981. Many scenesters felt that the Mutants should have begun album sessions for 415 immediately after the EP, but that didn't happen. Each of the 14 tracks on the new collection, "Curse of the Easily Amused" has either been remixed, or sourced from previously unreleased tapes. "From the band's point of view, each cut is a substantially different version than what might have appeared before," explains current Mutants bassist and project producer Peter Conheim. Eight songs have never been officially released on vinyl or CD in any form. The versions of 'Think Think Think' and 'Tribute to Russ Meyer' feature radically different approaches than what was heard on the Fun Terminal reissue. We recently rediscovered a tape reel that included those songs. The Mutants discarded or forgot about a ridiculous amount of music during its first eight years. Audio quality for all the tracks here is superior to anything that's come before. No overdubs were used in preparing this release."

The Mutants are the most popular band in San Francisco --Connie Chung, N.Y. Rocker

The Mutants are on of the most enduring bands to ooze from...the early punk womb, the Mabuhay Gardens --Suzanne Sefanac, BAM
Order vinyl: