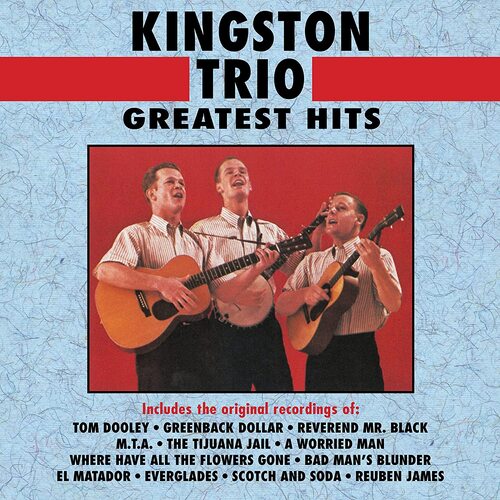 Label: Curb
Known as the originators of the folk music craze of the 60’s, the original Kingston Trioconsisted of Dave Guard on banjo, Bob Shane on guitar, and Nick Reynolds on guitar andbongos, with all three on vocals. They introduced a sound that was destined to revolutionizethe recording and entertainment industry, and influence a generation of students, adults andteenagers alike.The former university students started at the now-famous Purple Onion nightclub in SanFrancisco where they were booked for a week’s engagement. Eight months later, lines were stillforming outside the same club to see the trio. In September 1958, “Tom Dooley” hit the chartswith a bang, where it remained for 21 weeks and sold nearly 4 million copies. The Trio followedwith multiple million-selling albums and singles, rapidly becoming the hottest attraction in theworld. This was known as Kingston-mania, a prelude to Beatle-mania of 1964! The Kingston Triomade their mark on American and world music and pop culture with their songs, appearanceon the cover of Life Magazine, “Best Group Of The Year” and “Best Show Attraction Of TheYear” honors, and Grammy awards.The songs and performances spotlighted in this fine collection are all bona fide hits, apleasure to hear and remember for years to come!
Track Listing:Tom DooleyGreenback DollarRevered Mr. BlackM.T.A.The Tijuana JailA Worried ManWhere Have All The Flowers GoneBad man’s BlunderEl MatadorEvergladesScotch And SodaRuben James
Order vinyl: