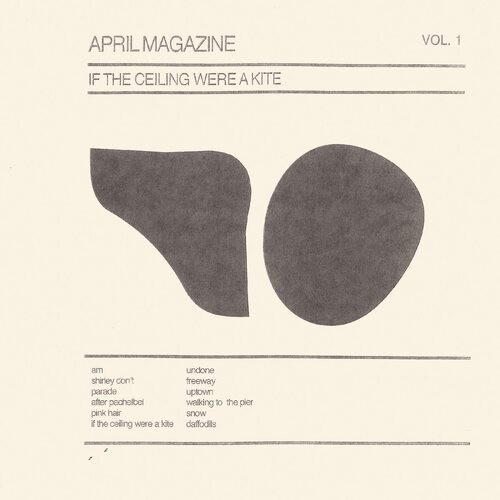 If The Ceiling Were A Kite: Vol. 1

Label: Tough Love
The purest a band can aim for is to present their milieu as a time capsule from the morning of. April Magazine deals deep in the hypnagogic charm of their surroundings. Since the 2018 release of “Shirley Don’t” a sneaky classic that first turned ears outside their SF Bay Area home the band has stirred out a handful of cryptic indie pop recordings nestled in warm aerosol hiss and scrappy hand-drawn cover art. Music that glints in the far back of an urban daydream where guitars could be bells, bells could be voices, and voices hardly find use in words. If The Ceiling Were A Kite is a document of things losing definition and time gone slack.

The songs on If The Ceiling Were A Kite were recorded over a span of about two years, after Peter, Mike and Kati started playing together around a four track cassette player in Peter’s bedroom.  Other kindred spirits like Julia Waves, Ian Collins, Anthony Comstock OBC, Zach Vito, and eventually David Diaz joined in on some of the recordings and live shows adding to the collective ‘whatever works’ ethos of April Magazine.